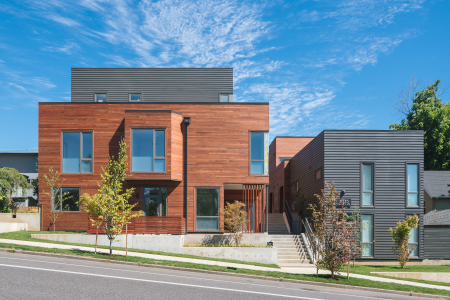 For a recent Portland Tribune column, I had the opportunity to visit the new Vermont 10 project in Southwest Portland’s Hillsdale neighborhood. To me it’s a nice little urban infill project in a part of Portland that is halfway between city and suburb, and not just geographically.

Hillsdale isn’t ridden with corporate restaurants and big-box retail, nor is Highway 10 running through the neighborhood too ridiculously wide. It has a lovely branch of the Multnomah County Library. Yet Hillsdale is one of the only places in town that’s fairly close in that I don’t quite feel comfortable biking to. And more importantly, it’s a place of strip malls and single-family houses: the kind of low-density area that, because of its proximity to the city center, probably is destined to become more urban and more dense.

Visiting the Vermont 10 project by Colab Architecture + Urban Design, I was reminded of a phrase mistakenly uttered in Back to the Future: “You’re my density.” In the movie, the character (George McFly) is trying to say, “You’re my destiny,” but misspeaks. I wonder if Vermont 10, a project laudable for the density it adds without sacrificing a human scale, is also Hillsdale’s destiny, and the destiny of other close-in neighborhoods of single-family homes. It’s not to say those single-family homes go away. I hope 95 percent of them stay. But we can’t expect a single-family home to be right for everyone. While Vermont 10 is certainly not priced as affordable housing for low wage owners, it still contributes to Portland’s overall density push and can help increase supply. 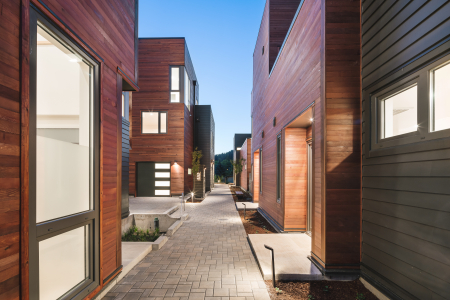 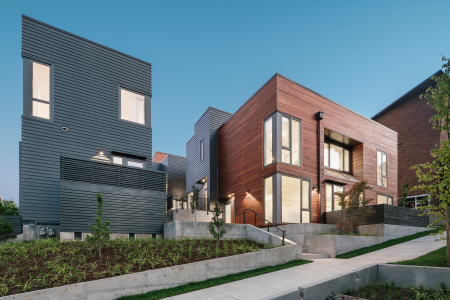 As I wrote in the column, “In the coming years fewer people will live in single-family houses and more will occupy higher-density dwellings like duplexes, accessory dwelling units (ADUs) and apartment complexes. The challenge is to design and build higher-density housing that fits in to single-family neighborhoods without seeming cheap or out of scale.”

Vermont 10 was built on the site of a single-family house owned by the adjacent St. Barnabas Episcopal church, allowing room for five small duplex buildings, adding up to 10 three-bedroom units. Each features interior finishes like oak hardwood floors and energy-fficient triple pane windows. Yet as Mark Engberg of Colab told me in a recent interview, “It’s about the community space first and then the architecture. The space between the buildings is the successful driver of the project.” It’s similar in that way to a prior Colab project, the Ankeny Lofts (and its second phase, Ankeny 2/3), in Southeast Portland, which were completed in 2014. “This all comes basically out of what we started on Ankeny, the idea of mews with duplexes on them and front doors, not big wide open spaces but little urban zones,” he said.

There are other things I like about Vermont 10, such as the relative economy of exterior materials and the clean lines of the overall forms. But sure enough, the best part is just walking down the little pathway between the units. It gives the sensation of being in a little urban village. Instead of one big mountain—a single building with 10 condos—it’s a series of foothills. Instead of passing each other in the parking lot, you come together in a little outdoor room with a human scale.

That said, the configuration of these clustered duplexes also contributes to the interior experience. “Most of these units have glazing and siding on three sides,” Engberg explains. “Some have light on four sides. That makes for a nicer environment, and a little bit more expensive building. But because we stay within the residential code and stick framing, we can offset that cost. That’s what makes the units so nice: you’ve got tons of light.” 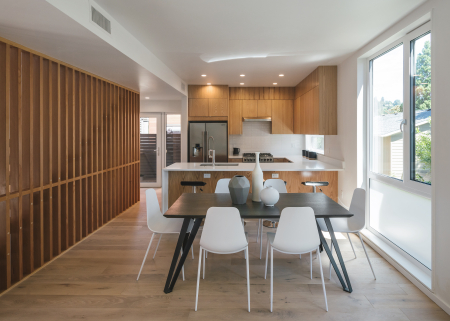 Natural light is to me the biggest determining factor in the quality of a multifamily residential space. It’s not to say you can’t have a lot of light coming from one or two sides of an apartment or condo, if it’s small enough and the windows are big enough. My apartment gets light on two of its four sides, and except for the hallway and bathroom it works because every other space borders a sizable window. But there are no luxury finishes or extra square footage that could entice me to live in one of those bowling-alley-shaped units that often get built in larger condo and apartment buildings.

Of course Vermont 10 is a series of duplexes, not a condo or apartment building. But perhaps it says something about the project that it’s easy for me to refer to it in the same breadth. Its duplexes are closer in scale and materiality to single-family homes than they are to mixed-use multifamily residential buildings, but perhaps because they create a common infrastructure that’s at a pedestrian scale, the brain makes the leap to thinking of Vermont 10 as urban.

What the project really represents, though, is a kind of missing-middle housing. That’s a phrase I hadn’t even heard five years ago but is common parlance today: the idea that there needs to be a middle ground between single family homes and large mixed-use residential buildings. There are many types of this housing—townhouses, courtyard apartments, triplex and fourplexes in addition to duplexes—and yet we haven’t built or allowed nearly enough of them in recent years.

Vermont 10 isn’t re-inventing the wheel, and it’s just one piece of a much larger puzzle. But particularly as one imagines a future MAX line down Barbur Boulevard, perhaps neighborhoods like Hillsdale can show what’s possible as Portland continues to grow and increase and density: to create dense spaces that feel tranquil and fit right in.

Title:
Vermont Ten In the News

COLAB Architecture Makes an Addition to the Ankeny Lofts

There is no denying the current development boom across the Northwest, especially in urban areas throughout Seattle, Vancouver, and Portland. It seems like every other street is brimming with cranes, construction, and story after story of new apartment buildings and housing developments. Some are, frankly, nothing new—that same old big-box, little-character look. Others, however, are hitting it out of the park with interesting designs and savvy details. Last year, COLAB Architecture + Urban Design (with offices in Portland and Los Angeles) finished an addition to the Ankeny Lofts—a residential urban infill project on Portland’s eastside that introduced a unique development pattern to the block by locating one building at the street front edge of the property and another at the rear of the site, with a courtyard separating the two buildings. The designers continued the pattern with Ankeny 2+3, which consists of four modern duplexes efficiently sited on two 25’x100’ parcels adjacent to the first phase of the project (Ankeny 1), which was completed in 2011. Units were designed to maximize natural lighting and provide residents the option and flexibility to use them as live/work spaces. There is a mix of studios and one bedroom units, with varying amenities such as private decks and courtyard gardens, green roofs, and secure indoor bicycle parking.

A walkway separates the two street-facing buildings, leading to a courtyard and providing access to the buildings at the rear of the block. According to COLAB founder Mark Engberg and his business partner Jeff Gersh, who designed and developed the project, “the design intent for the programming was to create a vibrant live/work environment that was occupied day and night.” Five of the units are already occupied by small businesses.

“Combined with the adjacent developments, Ankeny 1+2+3 creates a unique model for urban development,” notes Engberg. “As duplexes, the buildings were permitted under the residential code, reducing cost. The location, along a busy bicycle corridor and notable restaurant district, has helped attract a diverse blend of commercial and residential tenants creating a vibrant community within the interior walkways and courtyards of the block.”

As the PNW attracts more and more people from around the country, the development boom doesn’t show signs of tapering off anytime soon. We’ve always known that our summers, our proximity to nature, and the innovative zeitgeist of the region have been big draws for out-of-towners, but as more projects like COLAB’s Ankeny Lofts pop up, architecture are design are moving up the list as well.

Common exterior spaces encourage interaction and engagement between residents and tenants. The walkway surfaces are permeable pavers with garden spaces.

A wood sculpture wall in an exterior common area is by Oregon College of Art and Craft professor KarlBurkheimer. The dark materials (seen to the left of the sculpture) occur throughout the project and are either painted cement panels or painted metal panels.

The exterior cladding is mostly clear tongue and groove cedar. The designers wanted the exterior spaces to have a warm Northwest feel, with clean, contemporary lines.

A kitchen in one of the duplexes features ceramic glazed tile flooring and zebrano plastic laminate cabinetry, providing a neutral, modern slate for furnishings and décor.

Title:
COLAB Architecture Makes an Addition to the Ankeny Lofts

Title:
COLAB Architecture Makes an Addition to the Ankeny Lofts

Title:
Creativity On The Burnside

Title:
What's on the Tube?

Title:
Keys To The Kingdom

Title:
Inside The Tube

Title:
A Tubular Spot For Media And Munchies